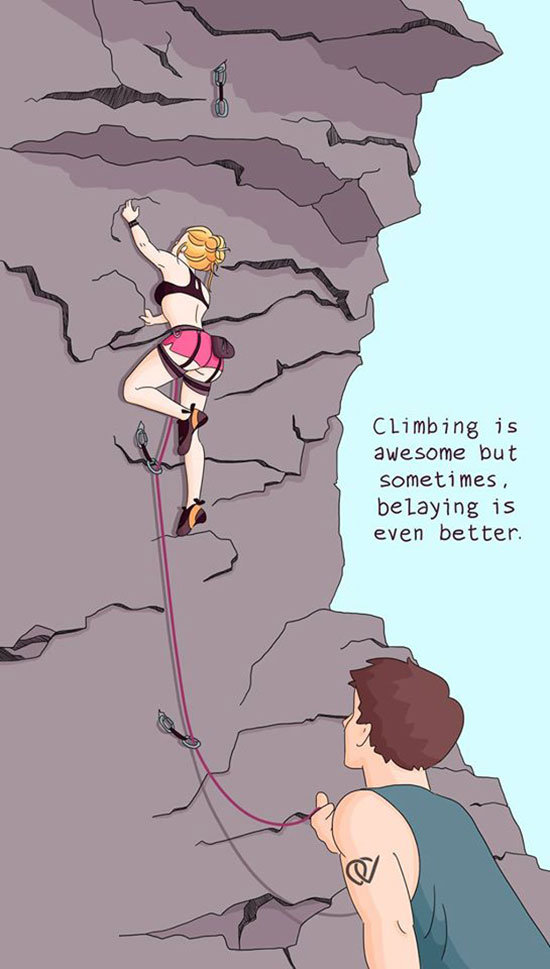 And if you want to know everything, I based this drawing on myself and my boyfriend. And I don't have any problems with the idea that my boyfriend stare at me when I climb. And I think that the day when this kind of drawing won't be considered as sexist, we will be in a world without sexism. It's not because a girl have a short short short shorty that it's a whore or that it's sexism. Just be OK with the human body (that is really really, really beautiful and cool to draw) and stop doing differences between boys and girls. I'm sure that if I drew a girl belaying a boy, nobody would have told "how sexist!". Just think about it... and like my page.

I know that if I wanted to participate to the equality in climbing, I would have to draw a girl belaying a guy. But I'm not a politician, I'm just an illustrator and I mostly want to have fun when I draw. And drawing a boy's ass isn't fun for me. Because they never wear shorts that are actually short enough for me to enjoy drawing it. And the drawing wouldn't have been clear without a extremely short outfit. And even if I made the choice of drawing a guy with a short short short shorty, i would have these reactions:

2) A boy would never wear that, it's stupid and I don't like your drawing, you sucks, you're the worse illustrator ever BOOOH!

3) my boyfriend: WHY THE FUCK DID YOU DRAW ME WITH THIS STUPID STRING?! And a lot of others bad reactions. I don't want to fights for my opinions when I draw, I just want to make people laugh.